Description of the species

The insects known by the name of black fly belong to the Diptera Order, and the Simulidae Family. These are insects that are distributed throughout the world, always associated with water currents, in which a good part of the life of these insects develops.

The life cycle of these insects develops through a complete metamorphosis (egg, larva, pupa and adult), in which the females deposit their eggs in running water courses (rivers, streams) or in the vegetation that is in contact With this water and once they hatch, the larvae appear, which attach themselves to the submerged vegetation or to the substrate. The next step in the cycle is the appearance of the pupae, which are located in the parts of the vegetation most sheltered from the flow of water and are prepared for the hatching of the adult. At this time the insect passes from the aquatic environment to the air environment, and it is at this stage that it generates the problems for humans and animals thanks to the need of the females to ingest blood to be able to carry out the maturation of the eggs inside and to be able to deposit them back to the waterways.

The characteristics of this species and those of its habitat mean that up to five or more generations can occur in the same year, with maximum population densities concentrated in late spring and early summer.

This species is characterized by inhabiting those lowland rivers in which there is a certain stream of water. The Douro River has also been found, in the Ter and the Tec, as well as several rivers in central and eastern Europe and Great Britain.

The adult females of S. erythrocephalum deposit their eggs in the water, which are fixed to the substrate thanks to their cover impregnated with an adhesive viscous secretion. The number of eggs that they deposit in each of these clutches can vary between 200 and 300 eggs.

Embryonic development is regulated by temperature, oxygenation, and photoperiod. When these factors do not offer optimal conditions for embryonic development, the eggs deposited in the fluvial substrate can remain diapaused for a long period of time until these conditions are again suitable for hatching.

The collection of eggs for observation is an almost impossible task in the Ebro river, due to the difficulty of prospecting in the areas of water current for its dimensions and the large volume of water that circulates.

At the end of embryonic development, the eggs hatch, giving way to the larvae. 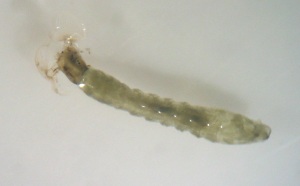 These larvae fixate on the submerged vegetation of the river current, looking for those areas of the plants where the water flow is stronger and they have more food.

The larva is characterized by its sub-cylindrical shape, which is thicker on the thorax and the terminal part of the abdomen, and its size varies between 3 and 10 mm, depending on the conditions in which it develops.

The head has two folding filtering appendages, the premandibular ones, through which it is fed by filtering. The shape of these modified premandibules is that of two fans, formed by a series of spokes with short setae, as if they were combs. These fans can be opened and closed so that the larva opens them facing the current of the river and then closes them to clean them with the help of the jaws. This facility to direct the appendages towards the current is achieved thanks to the disposition of the larva that can rotate the body from 90 to 180º. 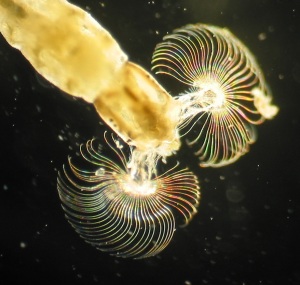 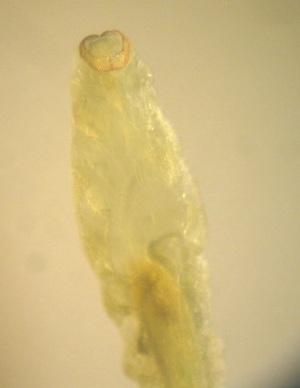 The coloration of the larva depends on the diet, so it can take on darker colorations when its digestive tract contains food.

Larval development comprises different stages, the duration of which depends on environmental conditions.

The collection of the larvae is carried out from the collection of the aquatic plants on which it develops and that in the Ebro river is mainly focused on the Potamogeton pectinatus species, although they can also be found in specimens of the Myriophyllum genus. 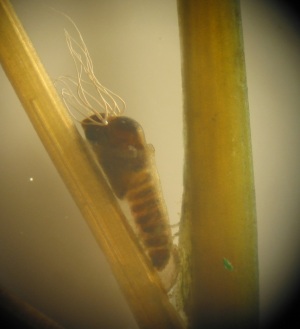 The next phase in the life cycle of this species is the pupa. At the end of larval development, the pre-pupa moves towards areas a little more sheltered from the current in which we found the larvae, such as the bifurcations of the vegetation, etc., and begins to build a silky case around its body within which we will find the pupa. This stage is the most important from the taxonomic point of view.

In Simulium erythrocephalum the shape of this case is triangular, with an opening on one side, arranged uniformly around the pupa. The size of this varies between 2 and 6 mm. Depending on the development of the pupa, we can clearly distinguish the head with the respiratory filaments, followed by the thorax and the abdomen. 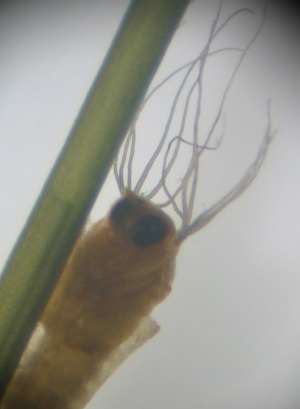 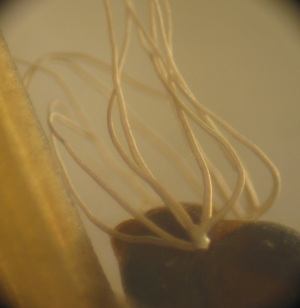 The collection of the pupae, like that of the larvae, is carried out by collecting the macrophytes on which they are fixed. By means of a boat and the necessary tools to take the macrophytes from the water (hooks) and to be able to observe if they contain fixed larvae or pupae (white basins, magnifying glasses), individuals of this species can be collected for their better observation in the laboratory. 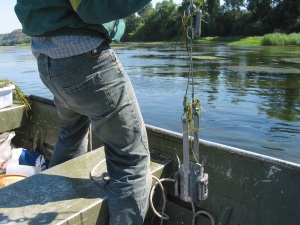 At the end of the pupal development we found an insect ready to go from the aquatic environment to the aerial environment. This step is carried out thanks to the rupture of the thorax membrane of the pupa, and air bubbles that help the adult to rise to the surface of the water and take refuge in the nearby emerging vegetation until it is ready to fly. 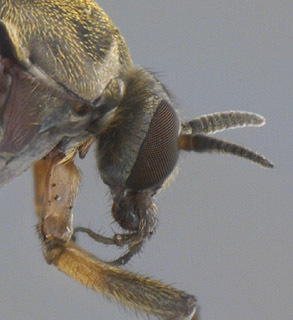 The adult stage, although it is not the most important in the classification of these insects, is of great importance, since this is the one that represents a nuisance for humans and other animals, because the females need to ingest blood to perform the trophogenesis.

These insects have the appearance of a small fly, dark in color and 3 to 5 mm in size.

In the head we find the oral apparatus, which in females mainly consists of short pieces, adapted to be able to tear the tissues of their hosts, with the labrum with apical denticles, the jaws and maxilla are finely toothed and the lip is shaped like short trunk.

The eyes are rounded and present a marked sexual dimorphism, in which males, apart from having larger eyes, do not leave space between them for the front, while females do.

Males group in swarms and copulate with females generally in resting or feeding areas. The larger eyes in the case of males serve to distinguish females from long distances.

Once the females are fertilized they look for their hosts to be able to carry out the maturation of the eggs. The activity of these is diurnal and outdoor, taking refuge only in the nearest vegetation.

The dispersion of the adults once they have emerged from the river can be several kilometers, as shown in the case of the Ebro river, affecting populations quite far from the river.

To find the hosts, females use visual, olfactory and tactile stimuli, so based on color, shape, CO2 concentration and smell they help to find their blood supply.

In the process of ingestion of blood, anticoagulant substances and parasites are inoculated into the host, which causes the characteristic allergic reactions that we have been able to observe in people.